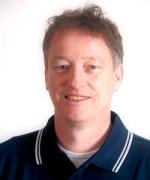 TEACHER in training - Wessel Middelburg finished his Physiotherapy education in 1986 at the „Leffelaar“ in Amsterdam. In the following years he gained experience working as therapist for the federal armed forces and with athletes. Since 1988 he worked in Broek op Langedijk (the Netherlands) in a clinic for physical and manual therapy.

His interest for the head, neck and tmj region strongly influenced his continuing education, e.g. courses in Kinetic control, neurodynamic mobilisation and dry needling. In 1994 he achieved his manual therapy degree (OMT) at the SOMT (NL).

Since 2006 Wessel is involved in the CRAFTA concept. He developed an intense interdisciplinary cooperation with paediatric physiotherapists, speech and language therapists and dentists.

His Master’s degree in manual therapy SOMT (NL) in 2011 provided the scientific background. In 2015 Wessel started the training to become a CRAFTA teacher.